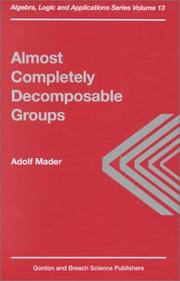 Published 2000 by Gordon and Breach Science Publishers in Amsterdam, The Netherlands .
Written in English